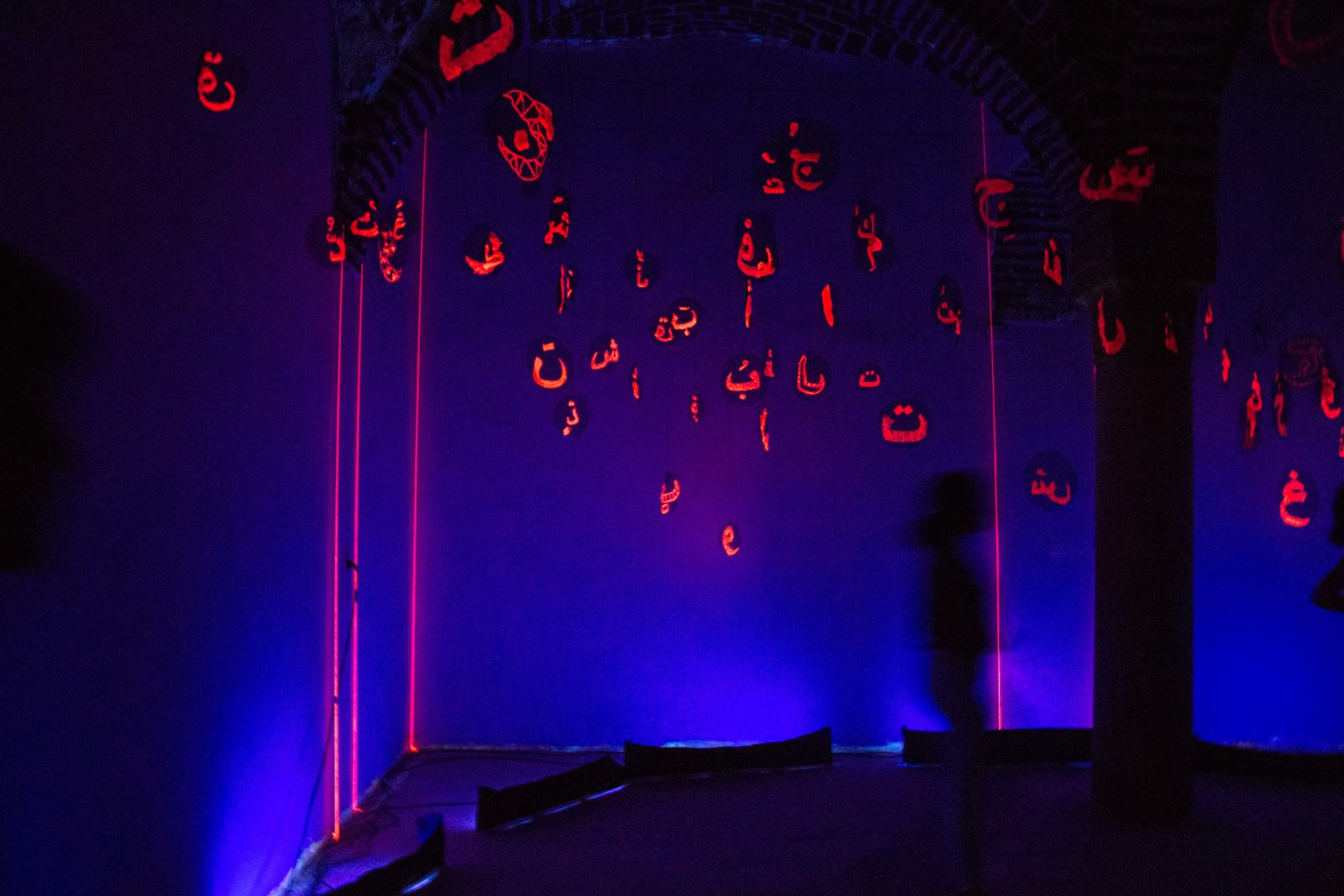 1. This attempt at an editorial is already a failed attempt at a coherent editorial. Yet, failure, a looming shadow which disables before it is even materialized might be the most generative door on which to attend to المحو and its twin, renaissance. How does one enact newer shapes when the previous ones are bloated with their incapacity to take form, filled with their defeats, pre-existing and overwhelming? Is failing a necessary condition for re-newal, another trying, any (re)something which supposes the crashes of the previous (re)? Is erasing what came and crashed, then just an attempt to closet the ghosts of failure?

2. Nothing is erased rather all words ever written are scribbled on top of each other, sedimented one above the other, layer after layer unevenly and going deeper until the bottom of the Earth. Maggie Nelson writes her thoughts in paragraphs, and my friend always says I confuse things so here is a failed form taken from someone else to please others to write an attempt at an editorial about erasing words and maybe even erasing editorials.

3. Erasure implies a claim to innocence, to a naivety that only systemic power and unacknowledged privilege can grant. To erase is in fact to be able to erase, to have produced oneself as a sole agent that can erase out of his will without carrying its heavy weight. To erase is to be a walking “I”, free and cohesive in oneself. What of porous selves, entangled and chained in objects and others? What can they erase without erasing themselves and their worlds?

4. How do you erase? Words write themselves, and lock moments in patterns difficult to forget. They operate like shapes which carve the fleeting into writings, incomplete yet subversive at times.

5. That is not true. It is a bloated ideal, fraught with old philosopher’s fantasies to see words as shapes. Rather, words in our places are never ethereal clouds. They are instead saliva on a dry day, that fills the mouth, circles around, before it becomes noticeable as it takes a more pregnant shape, growing in a closed environment, settling between the jawbone walls until it has to be spited out, not willingly but necessarily, irremediably thrown into the world, into whatever corner found.

6. Corners are also found between pages, for it is in corners that you find writers, hiding under their beds of words, quiet or whispering, not looking to disturb the narratives. But a writer who knows that will haunt himself better, you will pass through his words like a ghostly figure that one sees from the corner of the eyes but can never grasp. One has to be deeply haunted, by oneself, by one’s surroundings, hearing echoes that stretch in the soul in order to write. And it is a scary hauntedness to either forget, pretend around, or avoid hearing.

7. But one can read erasure as an action and in seeking creative works that circle around the tabula rasa, we entangle together a doing and a writing, a doing and a being, a doing and a thinking. The Western cogito which exists in the sole mind of the white man can erase and never look back, it is a cogito with multiple chances, that only endures by performing erasure of otherness. Yet in our بيوت the tables, when they are scrubbed, leave large traces of dust on the glass or long memories of the objects they were cleaned with, fingerprints, شيفون prints. To erase is instead to see what will be removed from the table, the spaces it takes, the shapes it leaves on the surface. To erase is to recognize what is left after erasure, not an empty start, but rather the insolvable, unremovable traces that will linger. These traces ought to be attended to, gazed at and questioned.

8. Then what is a tabula rasa? A blank slate? A surface of wax on which carved things have to be scrapped off? A story of possibilities, a bag of myths or the liminal emptiness between invented binaries?

9. What shape do tables of a tabula rasa take? The contours of the surfaces where we sort our inner stuffs, our sticky liquids that we carve into amorphous objects? Late capitalism has specific imaginaries of tables on which the individual finds his inner strength, to perform survival with a fake smile and a knack for self-flagellation to systemic processes devouring him. The tables for an era of the panopticon, are large wooden industrial tables, a touch of ‘authentic’ in modernist caves. You all know what they look like.

10. It should not be about tables, about a tabula all together perhaps. Tables are too cold and dry, too neat in their shape even when they are round. Only once did I hear the sound of a body being touched called “like a table”. Rather the process of posing things to be seen, discussed, broken, discarded, brought back, dismantled is an affective practice, close to the skin, that burns the fingers and the tongue and renders weary of what might carbonize on the way.

11. This is all too abstract and I have been told not to write of opaque and abstractions. They are “problems”. Slow your writing down. Who determines sanctioned writings, and who do they have to be legible for?

12. Of abstractions nonetheless. In a poem published for this issue, the author remembers a certain Leftist nostalgia, a memory of struggles and evasion, a sweeter taste in the mouth than the cynical aftermath of the present. In a text, another writes about women’s prisons at home, as nostalgic sites where to be confined, is to have one’s body locked in a closed space and one’s mind locked in memories of an outside that only makes its way through fragments.

13. In tabula rasa, erasure is not at stake, rather it is the game of unsettling things, performing the clean-out to see what remains, what lingers, which things in the world are too pervasive, too strong, too bodily to have a clear cut-out corner and, like internal substances, occupy uneasy spaces between walls. The tabula rasa is not a forgetting-remembering of what is pure, constitutes sanctioned beauty or the socially acceptable but rather the interstitials that produce discomfort, the dirt and dust.

14. So what of erasing when we are still lands of open wounds, older ones fermenting in their pus and new ones always revealing the coagulating dark blood of bodies? How are we to erase incompleteness? How are we to organize amid the scraps on the table, the structures of impossibility that regulate our perceptions, our sense of contemporaneity? What is there to organize when order itself is an imposed superstructure, a biting memory of authority and fear, of the power of facades to please Others across seas or at the head of tables? 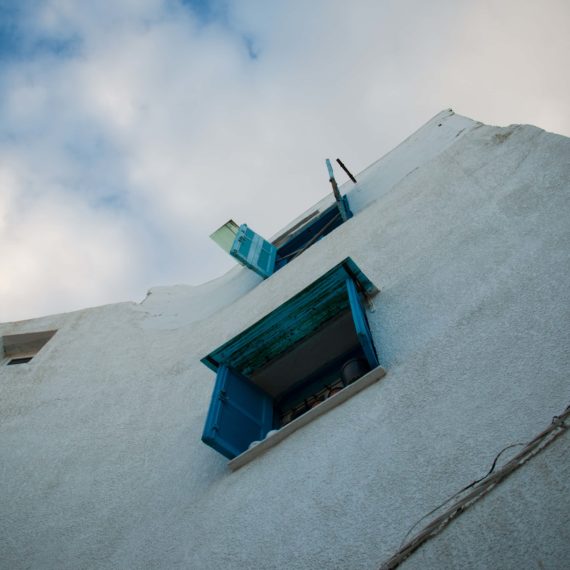 Stories from a Tunisian women’s prison

Last year, I had the opportunity to visit the women’s section in Harboub, a notorious Tunisian prison and I was able to talk to some of the women there. I left with more questions than answers. Harbou ..